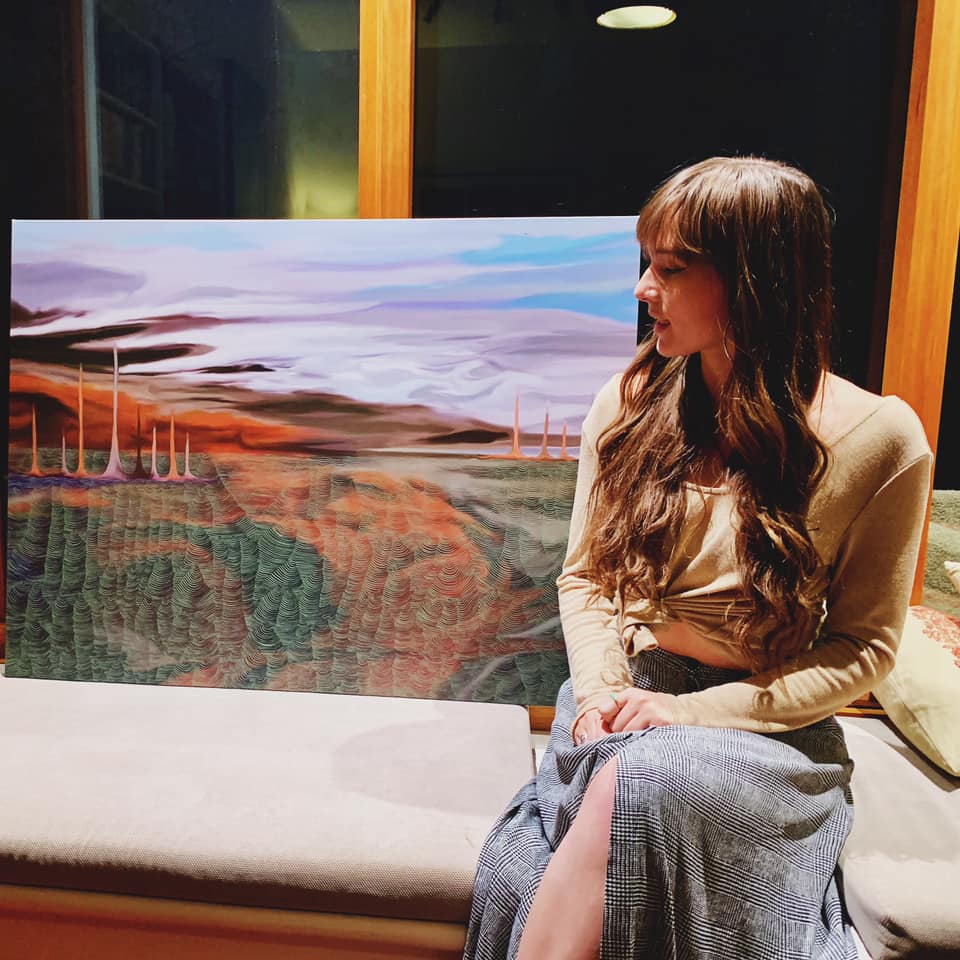 Dr Jazmina Cininas talked about her art and "The Female Werewolf and her Shaggy Suffragette Sisters".  Images courtesy of the artist and Australian Galleries

Tanja Ackerman, synaesthete artist:  "What is a synaesthete?  What is it like to see sound?"  Tanja's free talk was enhanced by an exhibition of eight of her stunning artworks.

4pm - Panel Chat "Women in Music".  The conversation was about: "The performance percentages of music written by women is less than 5%.  Is that a typo?".

Opening with a beautiful and moving multi-media presentation of Rachel Shields' Yuluwurri Gaayli/ Rainbow Child, narrated by Rachel in both in language and in English, accompanied by the inspired improvisations of Rosie Westbrook and her double bass. Yuluwurri Gaayli/Rainbow Child tells the story of Nainiouman Coya Coya, who knows that there is a song of love in all things, and of the Rainbow Serpent which travels throughout the lands to gather all the songs of love as a very special gift...

Next we witnessed an exciting new virtual reality game by Maize Wallin called Noise Drawers, which changed everything we knew about what is possible in music! Drawers opened, sounds emerged, sounds changed, sped up, slowed down... all the while skilfully manipulated by their creator.

The classical selection started with a remarkable presentation of Pulitzer Prize winning composer Jennifer Higdon's DASH.  The music itself was stunning, fabulously frenetic, and was enhanced even further by a part time-lapse, part live-drawing  by ReVerse Butcher, who pre-prepared several layers as a video time-lapse.

A presentation of a world premiere was next: the PLEXUS Commission Competition winning piece Flame and Shadow written by talented composer Anne Cawrse, was set to Sara Teasdale's poem of that name.  This piece was performed by soprano Greta Bradman and PLEXUS: Monica Curro (violin), Philip Arkinstall (clarinet) and Stefan Cassomenos (piano).

The next piece on the program saw the vivid musical imagination of film composer Jessica Wells out in full force, as she re-imagined the 1914 silent film Neptune's Daughter, featuring swimming star Annette Kellerman.

And finally, we were sent off into the night on a cloud of fantasy and beauty by the sultry sounds of jazz singer Michelle Nicolle and The Secret World who beguiled us with songs we knew, but possibly not as music written by women.